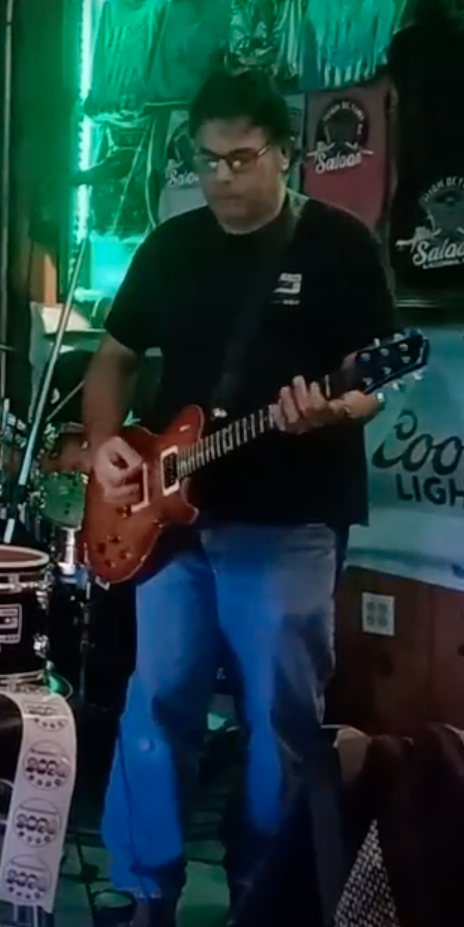 In my band I mainly play bass, but there are a handful of songs I sing lead vocals on and our lead vocalist takes over bass playing while I sing. On some of those, I play rhythm guitar. It’s been tough to decide which tuning to keep my guitar in because I’m only going to bring one guitar (I already bring two basses, one standard tuning, one tuned down a 1/2 step) and about 1/2 of the songs I sing are in standard and the other half a half step down. If we decide to throw in a song at the last minute when someone requests it, it’s not convenient to retune my guitar; we like to play without too much interruption to the flow. It would be nice to have an acoustic too, but bringing 3 guitars is enough for me.

Enter the Variax. I’ll admit I’m a bit late to the Variax game, but it’s a great technology. My first introduction was seeing Steve Howe from Yes use one on stage, on a stand just for a couple parts during Yes’s Rock and Roll Hall of Fame induction performance featuring Geddy Lee on bass for their classic “Roundabout.” He stepped up to a Variax 700 on a guitar stand in front of him to play the acoustic intro and outro to the song. Sounded great!

Line6 introduced the Variax in the early 2000’s, so the technology has been around just about 20 years now. Since Yamaha bought Line6 a while back, they’ve invigorated the brand I think with refreshing the guitar lineup as well as the pedalboards. The latest guitars use the Variax HD technology and newer guitars feature magnetic pickups, where the original line of guitars and basses only had the peizo bridges which are 1/2 the secret to Line6’s magic. Mine is a JTV-59, with the guitar’s designer James Tyler’s initials in the model name. 59, I’m assuming from the much sought after 1959 Les Paul of which the shape is inspired.

In our set, we usually play a Foo Fighter’s song, which I play rhythm guitar on and our singer plays bass on those and sometimes that Foo Fighter’s song is “Everlong” which is in Drop D. Tuning to Drop D isn’t a huge deal but when when I can turn the tuning dial and have the guitar switch tunings, it’s really cool. Re-tuning back to standard or to 1/2 step down is as easy as turning that knob again. I’ve also been playing around with different guitar tones on these songs, wondering what model might sound the best in the mix. Right now I’ve got it set to a Les Paul on the bridge pickup through a Marshall Plexi amp and a 4×10 Marshall cabinet. Pretty standard stuff.

Line6 has a pretty neat database of sorts if you’re looking to emulate a certain player’s tone. It’s their Tone Templates page, where they have a list of famous guitarists and links to diagrams of their rigs. Click on a guitarist’s name and you’ll see a page similar to the one above for Alex Lifeson. You can go into your amp and pedal simulator and dial in a close tone to what you’re after. I did this type of thing when I made bass presets for the Flamma FX100. You can use things like the templates above to get you in the right direction. Maybe you’ll get lucky and find a still photo or a rig rundown of how they’ve got stuff set and that really helps. It’s fun to do and great when you can nail a particular tone you’re looking for.

Speaking of amp and pedal simulation, I was hoping my HX Stomp would be able to incorporate some cool Variax features, but unfortunately it does not. The Stomp can use the magnetic pickups’ signal, but not the Variaxed or simulated voicings. So of course I bought a new piece of gear so I could do this. No, I didn’t throw down $900 for a Line6 Helix, I paid $175 (shipped) for a Line6 Firehawk FX. The little brother to the Helix. Maybe even a predecessor of sorts.

The Firehawk FX or any Line6 pedalboard with a VDI or Variax Digital Interface port on it (essentially an Ethernet cable) plus a Variax guitar are the perfect compliment to each other. In the patches one one of these pedalboards, the user can assign the type of guitar model as well as string tuning on top of the amp, cabinet and effects for a particular song, passage, measure, etc. The possibilities are endless. Take a listen to Stevic Mackay and the crazy stuff he does with his Variax signature model and Helix. Insane. I don’t know if he’d be able to do all of that stuff with a bunch of different tuned instruments on stands when playing live or some kind of crazy multi-necked instruments.

This got me thinking. What’s the ultimate Rush song to play? Cygnus X-1: Book II (Hemispheres) maybe? You’ve got Alex’s six and twelve string electrics, acoustic guitar, synth guitar… Plug that all into a few patches on your Helix or Firehawk. It’s doable. Of course not as showy as having a doubleneck (I have one, I know) but if you’re playing small gigs and don’t have a lot of space on stage for doublenecks or guitars onstage sitting up on stands so you can walk over to them, this is doable. What a world we live in!

I bought a used Line6 Helix LT (screaming deal, BTW) and promptly sold my Firehawk FX (for more than I bought it, so there’s that). The Helix is incredible and I’m sure I’m only using 1/16th of it’s potential! It’s truly amazing. Loads of potential with all the different ways you can configure your pedalboard ins and outs. Here are a couple of things I’ve come up with:

First, I was able to import my HX Stomp patches right in, so I didn’t have to reinvent the wheel as far as my bass tone was concerned. With that out of the way, I made a copy of that patch and added a second input–my Variax. This enables both my bass signal and Variax signal to be used independently, simultaneously. Here is the signal chain:

The other thing I’ve done is use the Helix’s routing feature and utilize the effects send 1/4″ out on the Helix into a patch cable then into my Sonuus i2m MIDI converter. That plugs into USB into my Mac running MainStage. I’ve only used it once live and of course my tuning on the patch that I was using was off so it sounded horrible. Once I figure that out, I think it will be great.