As mentioned in another review, I do the sound for the band I also play bass in. Back when we started the band, I was the defacto sound guy as my bandmates had little or no knowledge of such sorcery that is a mixing board. Since we are in the 21st Century, I opted for a mixer I could use remotely instead of stading right in front of it twiddling knobs and moving faders.

In another band I was in, the band leader had a Behringer X18 and I know he swore by it, so I bought one. At the time I was using a MacBook Pro for my MIDI pedal/keyboard rig so having it for controlling the mixer was perfect. 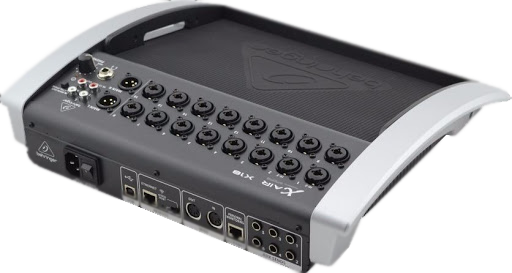 The X18 is a bit odd ball shaped. Behringer is most likely appealing to the tablet-using crowd so they have somewhere to put the tablet when it’s not in use. They also sell the XR-series of mixers (shown below) with more of a traditional rack case-friendly form factor. Both the X18 and the other XR mixers feature the XLR – 1/4″ jacks so you can plug either into the many channels on the mixer. The XR series mixers also feature a USB port where you can plug in a thumb drive and record the audio from your mixer right onto it. I wish my X18 had that!

For mixing in the audience, I use an iPad connected to our band’s WIFI network. While the Behringer X-mixers have WIFI built in, they aren’t powerful enough to compete with another WIFI network nearby. Most venues where we play have strong WIFI and since you don’t want every yayhoo in the joint messing with your mixer, you create a private, password protected WIFI network. I ended up buying a small router and turned off the X18’s built-in WIFI. Maybe an external antenna port might have been a good option for this mixer.

I ended up turning our mixer around so all of the ports are facing me, just like the photo above. These days I actually run a Mac Mini and a small monitor with a Bluetooth keyboard and mouse and the spot for the tablet is convient for putting my display on. Having the ability to save mixes and EQ settings is very, very convient. I also use it as my audio interface for my MIDI controlled sound effects and things I trigger with my MIDI pedalboard. It’s nice not having to carry anything extra that’s not already in my small rack case.

Just about all of us in the band are using in-ear monitors now (there’s always one hold out, am I right?) and the X18 has six Aux Sends and I have easily set up each player’s mix, with more of them and less of everyone else when we reherarse. When we get to a venue and set up, I create a duplicate mix and call it the name of the venue usually, denoting how many floor monitors, subs we’re using, if it’s indoors or out. All I need to do is add each instrument or mic to the Main Mix then save the mix (it actually creates an XML file on your PC if you need it, or it’s saved to the mixer). This makes calling up a venue’s mix simple the next time you play there.

I highly recommend the X Air mixers from Behringer. It’s been two years of gigging with it and I couldn’t be happier. Some people may not want to buy because of the name, but if you haven’t used Behringer gear lately, give them another look. Do your research, read and watch reviews. Like most companies, they have their good products and some products you may want to avoid or take into condsideration the price. I have been very happy with the Behringer products I have been using such as the GDI-21, UMC404HD, and the Powerplay P1.

If you have something you would like us to review, please let us know by using this form or contacting us on social media