One of the things most bass players struggle with in a band setting is being heard. At one point in my band, we had two guitarists, so trying to get a note in edgewise was always a struggle. When one guitarist left the band, I had a better chance of being heard over the remaining guitar player, especially while filling in during his guitar solos. The rythm section (drums and bass in my band) need to sonically fill in where the guitar would be playing chords or keeping the hook or the bed of the song going. Contrary to popular belief, guitarists for the most part don’t care about how they sound in the mix. They just want to be louder. Okay, maybe not ALL guitarists!

Me worrying about being heard in the mix brings me to an EQ pedal. Joyo’s JF-11 is a six band EQ with an on and off, true bypass switch. You can plug it right into your existing pedalboard power supply or run it off of a 9-volt battery. Mine is at the front of my signal chain on my pedalboard and it’s on all the time. I use a pyramid looking EQ setting, with the mids boosted. This gets me heard in the mix. I’ve also tried the pedal as something I can turn on during solos, but the last gig we played I recorded the audio from the mixing board’s main speaker mix and I could hear myself in every song–except when the guitarist’s lead patch was too loud, but that’s a different topic. 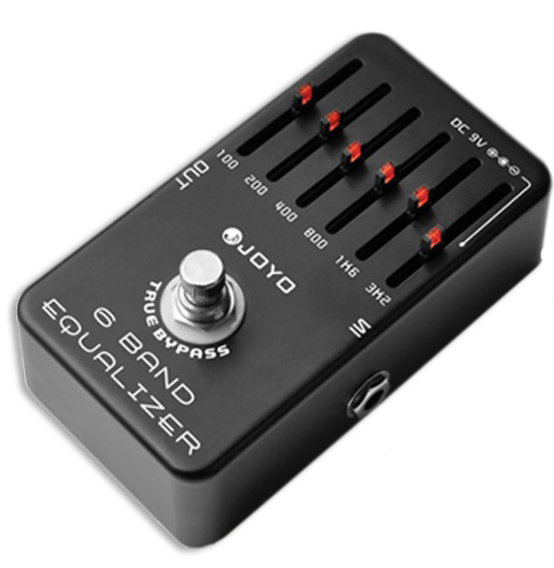 Overall, I think the pedal is very well constructed. Not plasticy feeling and the LED lit EQ sliders are a nice touch, especially on a dark stage when I want to tweak the settings. My main gripe is the lack of a main signal potentiometer so you could add a little or a lot of EQ to your instrument. Other small things that were not dealbreakers were the word IN (check the photo above) was printed backward, again, not a big deal. My other gripe is the hard time I am having with keeping Velcro stuck to the bottom of my Joyo pedals. It must be something in the rubber at the bottom of the pedals.

I highly recommend the Joyo JF-11 6-Band Equalizer pedal. It works well for guitar and bass and can compliment any practicing musician’s setup.