Introduction
In the early 2000s, I started looking into my family history. The Internet was not what it is today with hundreds of websites rich with family trees and historical documents. For the most part it was the records of the Morman Church. Using the data from their website, I was able to cobble together the Goyette history back to the early 1600’s.

There were plenty of gaps in the lineage, and I didn’t know if I was on the right path or not until my dad and mom showed me handwritten notes that one of my dad’s aunts had given them. Those notes showed my dad’s family line (no dates were on those pages) and I remember feeling overwhelmed with joy because those handwritten notes from the 1950s showed exactly the lineage that I had found online. As a matter of fact, it filled in many of the gaps that the website I used had. Using the notes and what I found online took me back to the early 1600s in France.

The French Connection
Michel Joguet was born around 1605-1610 in Charente-Maritime, France and married Marie Jounot or Grippeau who was born around the same time frame as well. Unfortunately our ancestry stops there for now. Hopefully we can find out more about these two soon. There are not many explanations of the name change from Joguet to Goguet to Goyette. My dad said that during the First World War, his Uncle George was drafted and when they asked him his name, he said in the French-Canadian way “Guy-yette” and that’s how he and his family started spelling his last name, Guyette. Maybe there is a similar story for Michel and his son since I am assuming they most likely did not write. Perhaps it is a dit-name.

Pierre was the son of Michel and Marie and born June 17, 1635. His parents could have been 20 to 25 or so when they were married if the math works out (Pierre born 1635, they were born 1610, so that’s 25 years). But that seems a bit old for them to have their first child, so some of the dates don’t match up, or perhaps Marie had trouble with previous pregnacies. After some digging, it was found that Pierre’s baptism was June 17th, 1635 and some other family historian put his birth as early as 1629 (see photo above), which would be, give or take, 300 years before my father was born. That puts Pierre’s parents at around 18 or 19 when he was born, which sounds correct.

Not much else is known about Pierre during his life in France, only that he married Louise Garnier, daughter of Charles Garnier and Jeanne Labraye in 1656 in Aunis, France. Louise was born around 1632. Two years after they married, they welcomed their first daughter Marie-Anne who according to Church records was baptized February 25, 1658. The next year, the young family would travel to New France (Quebec, Canada) on a recruitment voyage headed by Jeanne Mance.

The Recruitment of 1659
Jeanne Mance sailed from the new settlement of Ville Marie she co-found in New France (Montreal, Quebec, Canada) back to France, known as “La Recrue de 1659” (The Recruitment of 1659) to find people willing to relocate to Montreal and help populate the new colony and a build a hospital. Of the 150 original settlers who came to New France to establish the colony by 1650, only 50 of them remained according to some accounts.

The young Goguet couple and their daughter were among the some 200 passengers and crew aboard the 350 ton ship Le Saint-Andre which left Rochelle, France on July 2, 1659 with two other ships called Prince Guillaume (180 ton) and Le Sacrifice d’Abraham (200 tons). By comparison, the Mayflower was 180 tons. Le Saint-Andre had previously been a hospital ship for the French Navy and it was said that it was not disinfected before it embarked for Canada. It also carried 20 cannons.

The ship and 117 of the travellers are identified on this page. Pierre and Louise traveled with two of Louise’s sisters and their husbands.  Michèle Garnier (1638-1720) with her husband, Simon Jean Cardinal (1619-1679) and their sons: Jacques, aged 5 and Jean, aged 1. Marie Marguerite Garnier (1625-1701) and her husband, Olivier Charbonneau (1611-unknown) with their only daughter Anne, aged 2. The fourth sister, Marie Louise, arrived in New France the year before in 1658 as “Fille à marier” and married Jean Pichard.

From migrations.fr: Rolle of the crew of the ship Le Saint André built in 16____ to ____
from the port of 300 tons draft loaded 12 feet unloaded 10 feet 2 decks, 2 forecastles, belonging to Sieur J. Nezereau armed at La Rochelle by Jean Moisnier under the command of Sieur Guillaume Poulet to go to Quebec…

On the voyage, at least eight people died and upon their arrival in Quebec City on September 7th of the same year, ten more passengers lost their lives. From Quebec City, Goguet and his family took a smaller boat to Montreal. Some accounts mention that there was Plague on board and that is what killed those who died on the 67 day (two months and five day) journey.

“The last vessel was found, on arrival, [people] infected with purple and pestilential fevers. She was carrying two hundred people, almost all of whom were sick. Eight of them died at sea and others on land. Almost the whole country was infected, and the hospital filled with sick people. “
Mother Marie of the Incarnation, Letter to her son (1659)

From Library and Archives Canada:
The crossing to New France was subject to all sorts of perils: weather, pirates, and illness among the crew and passengers. With these uncertainties, the duration of the crossing varied. In 1665, it took New France’s new Intendant, Jean Talon, 117 days to reach Québec; in 1678, the Arc-en-ciel made the trip in 35 days. Taking into account the requirements of the navigational season, it was better to set sail from France before May 1 and from Québec before the end of September. Since ships were not [usually] larger than 200 tonnes in the 17th century, accommodations on board were quite modest, and space was limited. Often, food and merchandise were spoiled by water seepage, and passengers had to make do with cold meals and soggy bedding. So great were the risks involved in reaching these far-off destinations, that surviving the dangers and perils of the sea depended as much on chance as on luck. Despite everything, most of the sailors and passengers arrived safely.

According to ports.com, a ship travelling at 7 knots (the speed of a ship in the 17th Century, roughly 8 MPH) would take at minumum 20 days to sail from La Rochelle, France to Montreal, Canada. This is not taking into account headwinds, other weather or any other factor that may have slowed them down such as the ones mentioned above and is also using modern navigation equipment, travelling in a straight course. Using the ports.com calculator, slowing the ship’s speed to 4 knots increased the voyage to just over 35 days, which is the time the Arc-en-ciel made the voyage mentioned above. With the same calulator, slowing the ship to 2 knots (about 2.3 MPH), the journey becomes 72 days.

According to Wikipedia, the average human walking speed is about 3 MPH. So the 67 day voyage of Pierre, Louise and Marie-Anne would have been this slow…cramped aboard a boat with terrible living conditions…with people who have the Plague…not knowing how long the journey would take or what lie ahead for them in the New World. Can you imagine how many times Pierre and Louise regretted their decision? The ships encountered bad weather and at one point ran out of fresh water until they reached the St. Lawrence River.

In The New World
In February 25, 1661, Pierre and a group of 12 other settlers were captured by Iroquois. He had been traded by the natives as a slave, possibly to the Dutch as he was said to be held in New Holland, New York, near Buffalo (which may not be accurate as the Dutch controlled land in modern NY State).(8) 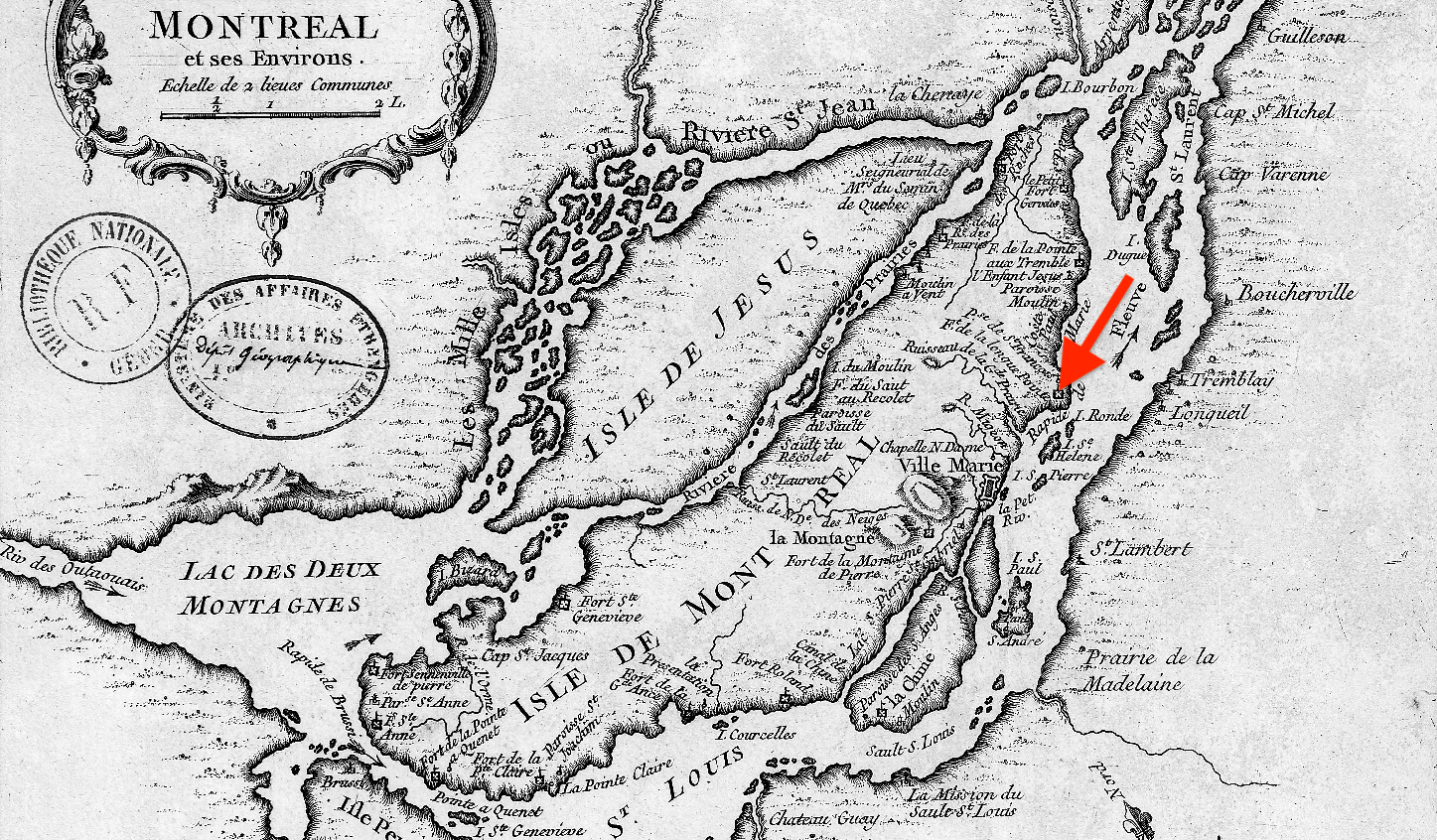 On December 9, 1665 Pierre received a deed for the lands on the St. Frances side of Montreal island. It later became Longue Pointe (shown with the red arrow above). “Longue-Pointe was the site of a famous battle in the American Revolutionary War in 1775, in which Ethan Allen made an ill-fated attempt to capture Montreal from the Kingdom of Great Britain.” (5)
Pierre was listed on the 1667 census in Montreal as cultivating three acres and in the 1681 census at Cote St. Francois at Rivieres des Prairies, he was said to have a house, furniture, five cows, and twelve acres.

There is a book by Barbara Harvey that I would love to own or at least read but I haven’t been able to find it for sale or at a library near me. 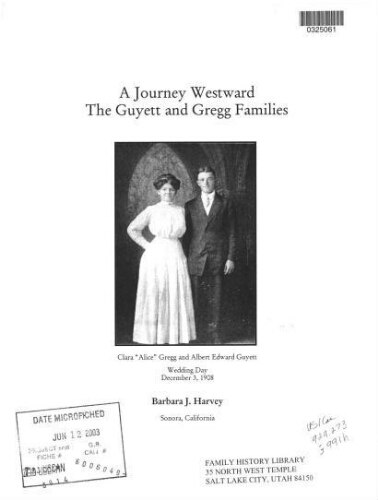