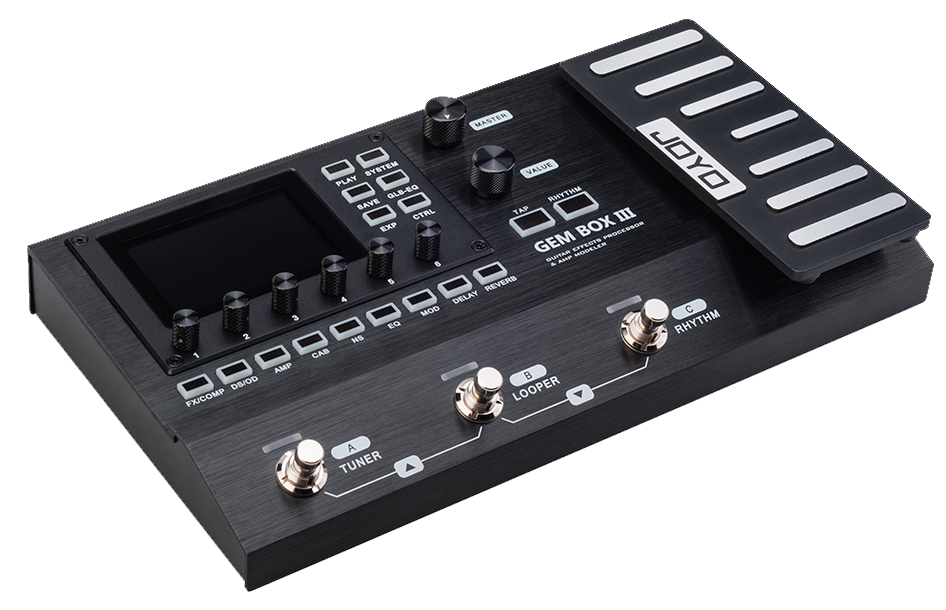 I was on the hunt for a multi-effects pedal that I could plug into my computer to edit the patches and I reviewed and created patches for the Flamma FX100. Take a look at those pages for more info. I’m mainly a bass player, so I’m a bit picky when it comes to multi-effects pedals.

The problem I’ve had with other multi-effects pedals I’ve used is there’s no way to offload your patches for safe keeping and you need to rely on the tiny screen to edit the patches. Plus, what if I want to download patches or send my patch to someone? In the band I’m in, our guitarist uses an AxeFX and I’m fascinated by the patches he downloads and installs on that thing! He has an Eddie Van Halen one in particular that sounds just like EVH on the first VH album. The other problem I have is I’m not going to spend $500+ on something that I think I can get for less money.

Like the FX100, the Joyo Gem Box III gives you a programmable expression pedal, but the Gem Box III has some major advantages. First, the addition of another foot switch is huge. The FX100 uses the foot switches to go up and down patches, but with the Gem Box III it’s a little different. The patches are split into 3 banks, so when you’re on Patch #5 for example, the three foot switches are programmed so you can have one clean patch, one with chorus one with overdrive–or whatever you want. I found it very useful to group my patches this way and it has worked out fine for me at gigs too.

As an Amazon Associate I earn from qualifying purchases.